Coming in April 2012, MAC invites you to take your eye shadow to the Extra Dimension. 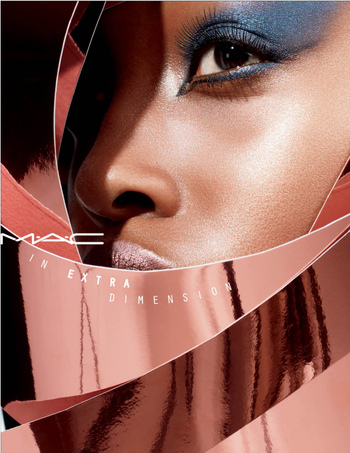 Scheduled for a North American release the first week of April 2012 (yes, same time as Reel Sexy) this collection will debut a new technological formula in the form of ten (10) Extra Dimension Eyeshadows and three (3) Extra Dimension Skinfinishes. Also coming back from its successful launch with the Semi-Precious eyeshadow collection are the split fibre cheek and eye shadow blending brushes. 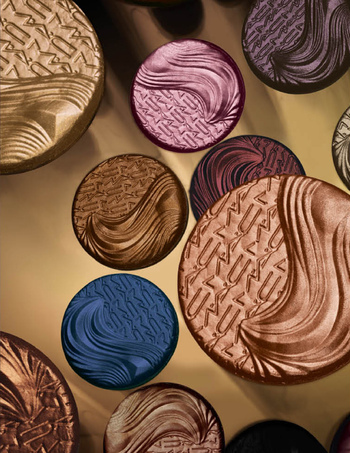 With ten eye shadows it’s easy to feel overwhelmed. Reports indicate these shadows are large-sized like the Mineralize eyeshadows that were recently relaunched. For me personally I like to gravitate towards colors I will use the most frequently given the size of the product. So with my skin tone (NW) in consideration and my budget, plus what my inner beauty geek tells me, here are my top pics for the Extra Dimension eye shadows

WARM THUNDER — Described as a mid-tone silver grey, strangely this a color missing from my eye shadow stash. I don’t own Electra nor do I own any MAC silver pigments. Silver is great on gals with cool/red undertones as a base and as a highlight.

BLUE ORBIT — Light iridescent purple? Iridescent AND purple? I’m going to call this now as THE shade to get from this collection. This is a color I don’t recall MAC having anything in its current eye shadow or pigment lineup. So suffice it to say that in addition to the color, the iridescent effect, and the new formula, Blue Orbit will be the Shimmermint (from MAC’s Christmas Glitter & Ice ) of this collection.

SWEET HEAT — A bright peach champagne, this looks to be a very pretty brow highlight shade and even a nice neutral color to wear all over the eyelid. It looks like it will compliment cooler skintones a bit better but not so much that warm toned beauties couldn’t rock it.

MODERN PEWTER — Pow! This shade reminds me of the Dalliance eyeshadow from the Peacocky collection. This definitely looks to be a cool-toned shade and would look amazing blended with Blue Orbit for an interesting eye look. I know I plan to try it!

You can find pictures of the remaining shadows on this German website.

Unlike the Mineralize Skinfinishes (which do not last on my super oily skin) the Extra Dimension Skinfinishes (EDS) are reported to be a new formula like the eye shadows. In the graphic earlier in this post where you see the small eye shadows and three ‘bigger’ ones, those three big ones look to be the Extra Dimension skinfinishes. What excites me about these is that if you have severely oily skin as I do, those Mineralize Skin Finishes seem to last only nanoseconds on your skin before evaporating into a thought. Me being the techno-geek that I am, I so hope these do last longer on my skin. Glorify, the one described as having the copper golden shimmer is definitely on my list. Superb may be next and this is probably the one that would look the best on all skin tones. Whisper of Gilt looks to be a little too light for my skintone but could be a nice highlighter. 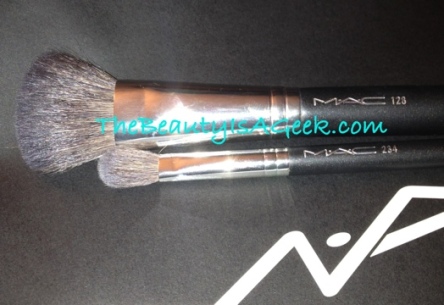 Finding out these split fibre brushes were coming back was the main reason the Extra Dimension collection piqued my interest. Originally launched with the limited edition Semi-Precious collection last year, these brushes are unique in that one side is made up of natural hairs while the other side is made up of synthetic hairs. This makes for a great multi-purpose brush for applying cream shadows (like Paint Pots and Make Up For Ever Aqua Creams) and cream blushes. I use mine religiously to apply cream and powder products then blend them–all this with only having to use one brush. 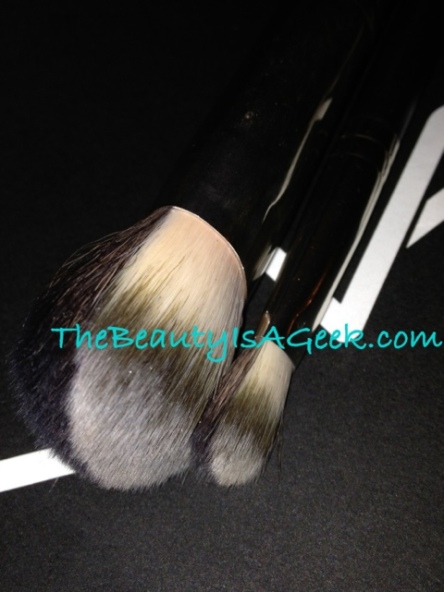 So are you excited about this collection? Planning to pick up a few items? See any colors that you just gotta have? Hit me up in the comments.

By now most of you know of my undying devotion to Rescue Beauty Lounge nail polishes. Yep, I’m a crazy RBL and want everyone to know it. I got into the RBL polish collecting game late so I missed out on two nail polish shades so cool, so amazing, so stunning I was soo dissapointed…until the Vintage BIB voting brought them back.

So for your consideration and evaluation, I present to you, from the Vintage Bring it Back voting, the two ‘Terror Twins’ of RBL, Moxie and Killa Red! :::cue me putting on Don King hair and yelling ‘Only in America’::: 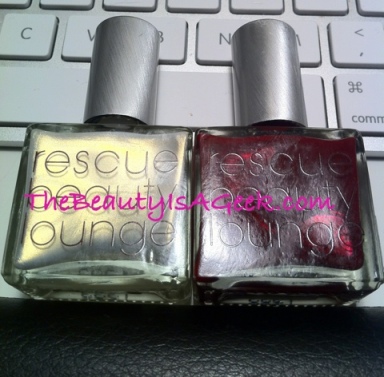 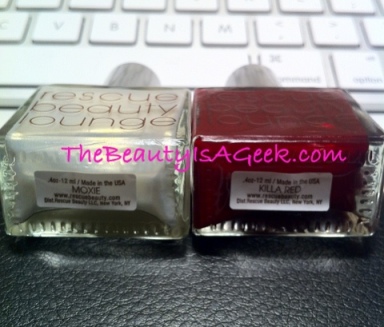 Can you handle these? Of course you can!

Candlelight in a bottle—that is what Moxie is in a nutshell. This is a beautiful white gold frost that I believe would look subtle on warm skintones but on cool skintones like mine it commands attention. On both skin tones your nails look like glowing orbs. Weird, I know but the effect is hella sexy. Moxie is somewhat sheer in one coat, opaque in two coats and richer with three coats. As this is a frost finish there can be some visible ‘brushstrokes’ if you look really close but I usually attribute that to me being impatient and not letting each coat dry completely before adding another one. When I wore this color out I got a lot of compliments—especially from women of color. 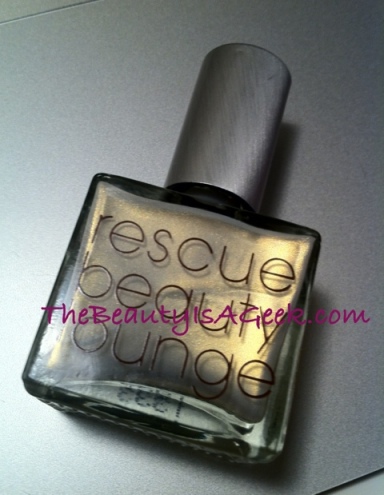 RBL Moxie: It is truly candlelight in a bottle.

RBL Moxie. 3 coats. God how I LOVE this color. Glows like an angel.

The only color I have similar to Moxie is NARS Versailles.  Versailles has yellow-gold shimmer which doesn’t look all that hot against my cool skintone.  It’s even more pronounced next to Moxie and you can see how much more white-gold it is. 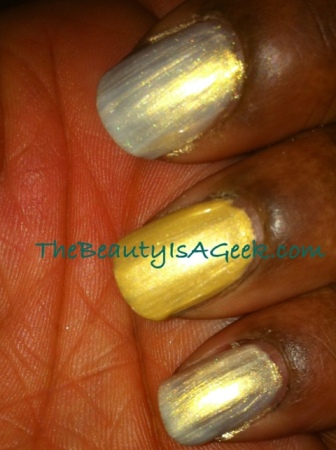 I am usually not a fan of red nail polishes. Not because of the color (I love red) but because of the undertones. With this color, Ji has come up with the best, most awesome, most-kick ass blue-red cream nail polish that trumps even Chinoise (my other favorite blue red). Where Chinoise seems more trendy, Killa Red is ‘grown and sexy’. It also has a rich translucence that borders on gothic. The color is rich and is opaque in one coat, even more stunning with two coats. I would double-up on the top coat simply to further enhance the shine and dimension of this color. 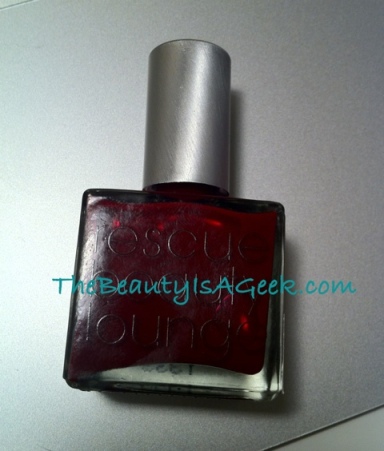 As with all RBL polishes I own so far, I get a little over a week of wear with this and only minimal tip wear. As I work in IT I type a LOT (over 120wpm) so while I do expect my nail polish to wear at the tips, shattering and sending dangerous shards of nail polish isn’t something that happens with RBL. In other words, no chipping. Cost per bottle is $18 and free domestic shipping is offered for orders over $100 ($200 for international orders) at RescueBeauty.com. Remember, Rescue Beauty Lounge nail polishes are 5-Free and Made in the USA. So are you seriously itching to get these? You should. But don’t wait to long as they are only available for a limited time and once the supply is gone, it’s gone until Ji decides it’s time to bring it back.

If you’re a edgy yet classy dame, I’d suggest wearing a Killa Red pedi with a Moxi mani. If you don’t think you fit this bill, check out the video below by one of my favorite music icons, Dame Shirley Bassey. You know she’d rock this combo and rock it hard.

Incoming from Uhura (my iPhone)

The Beauty Is A Geek